Les Saintes was one of those places I never thought I’d get to visit. Its rolling hills, cobbled streets and white-sand beaches make it a true tropical paradise; the ultimate island getaway.

I found myself, bleary-eyed, on a 6am bus down to Trois Rivières, the port town of Guadeloupe. We had left plenty of time to make the 9am ferry because buses round here are hideously unreliable. A little while later, I was clutching my lurching stomach on a ferry crossing from hell, as we belted through the waves on a little catamaran-type thing.

It’s worth knowing that all this was beyond worth it once we eventually crawled onto the pier at Terre de Haut, Les Saintes.

Like many other microscopic islands, Les Saintes has no vehicles. Therefore, we had a delicious choice between electric bikes, Vespa-type scooters and golf carts. We opted to hire electric bikes for around 20€ per day, which allowed us to gleefully zoom through the tiny streets, as well as blast up and down the hilly track touring the whole island.

What I hadn’t realised about electric bikes is that you still need to pedal. Hence, my initial ride was rather short-lived and I was soon lying in a heap underneath my electric bike. Nevertheless, once you start pedalling, it’s rather like walking on one of those moving walkways they have in airports; minimal effort and terrific speed!!

We were loving the bikes so much that before we knew it we had reached the end of the road, quite literally. The tarmac became gravel, which became rocks, which became sand, and the most beautiful little beach stretched out before us. 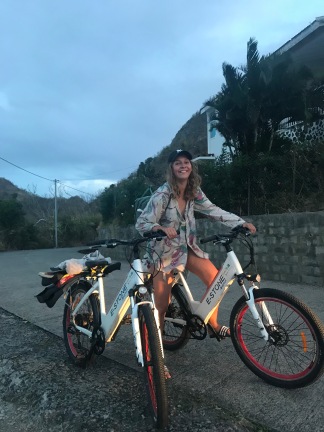 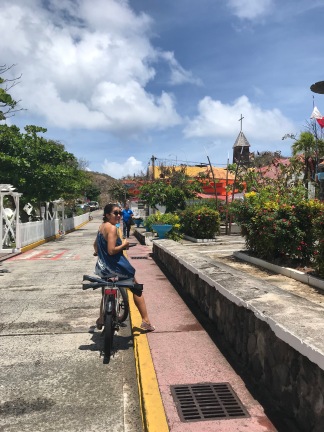 Les Saintes has a small selection of hotels and Airbnb properties, but we had decided to tent it, and this beach seemed like the perfect little spot.

The evening was spent lying under the cloudless, starry sky chatting away about all sorts, on the hideaway little beach we had somehow bagged for ourselves. 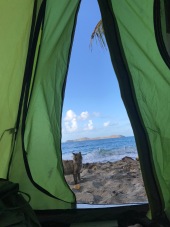 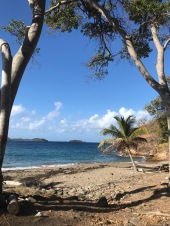 Up bright and early the next morning, and after a quick 7am snorkelling venture, we packed up base and zoomed our way back across to the main village to go diving.

The island offers wonderful sub-marine wildlife, including a particularly large hawksbill turtle who came for a swim right next to me!

The rest of our time on the island was spent touring the many beaches it has to offer, at each beach trying to repair the tan/burn lines acquired at the previous one… 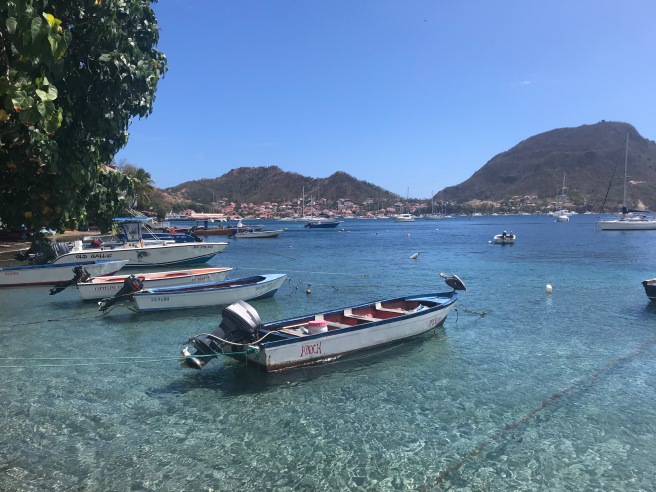 Things are made very easy in Les Saintes, in that everything is located on the same street. A little cobbled road which runs the length of the main bay (Baie des Saintes), this seemed to be the only place on the island you can actually spend money. There are several quirky, beach-themed restaurants here serving a wide array of fishy dishes (which I’ve come to rather enjoy).

There is also a well-known crêperie next to the pier which specialises in ‘fish crepes’, so I am told. Well, these fish crepes must be quite something because each time we passed by, they had regretfully sold out. 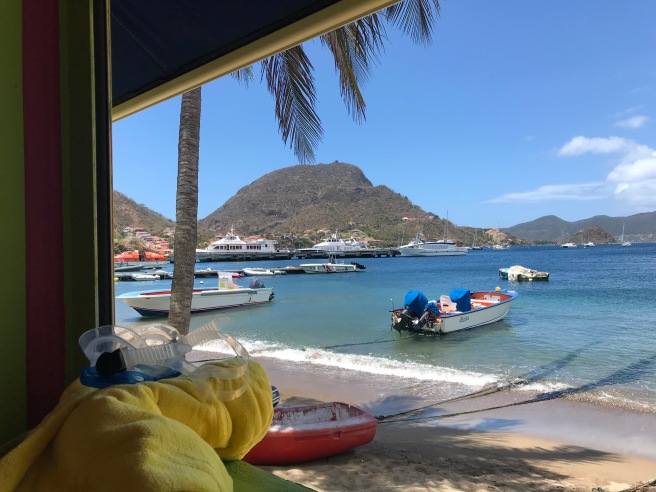 Overall, our little weekend getaway to Les Saintes was nothing short of a treat. Beaches to die for, amazing food, electric bikes (!) and a great time spent with my wonderful French roomie.